“Mai ist vorbei” as well as another Liftsurf-Trip! This was the third I organised and building on the experience from the last two trips, I’m glad to say, that the outcome was very positive.

We had fantastic surf conditions, specially on the first days, with small but perfect waves, sun and warm weather… even the water was clear and much warmer than the normal!

Because the group was very fit we surfed almost always to times a day with the surf course in the morning and a free surf in the afternoon. The motivation was high, which was great, but I’m afraid some will need a vacation after this vacation in order to collect all the energy back! Well, at least no one can say you did’t made the best of it!:)

The cornerstones of the Liftsurf concept, combining Surf with the discovery of the surrounding Nature and Culture, were again part of the program. Beside the regular surf courses that took place every morning, we also did a city and a nature tour during the trip.

Under a warming sun and a cool coastal breeze we found the perfects conditions to explore the small nautical city of Viana do Castelo. We started by taking the small ferry across the river, following a 1 hour walk in the city. After we tried some of the tasty “Bolas de Berlim” from Manuel Natário, the most typical and famous pastry shop in the region. For the most part the taste of this traditional sweets generated directly a few fans. The questions that arose was, how many of this can we bring back home in a bag?

We ended this tour watching the evening sun shining over the city on the Santuário de Santa Luzia with an amazing panorama view over the coast and the surrounding mountains.

For the Nature tour we didn’t had the same weather conditions. Because it rained most of the day we had to improvise and we couldn’t stick to the initial plan, that was visiting the waterfalls from Pincho. Anyway, the alternative was not short of fun!:)

Has a joke we start calling the nature tour, the “bar tour”! After visiting 2 other famous surf spots along the coast, we stopped in a café in Moledo, where we drank a few super-bocks (beer) to cheer up the raining day. We kept driving to Caminha, where we met the Spanish boarder and after that we started driving up inland to the mountains. Here we stopped in Caçana. A very traditional Portuguese “Tasca” that served us some local dishes of bread, meet and… snails!! The snail season started earlier this year allowing us (or the bravest of us) to taste this delicacy. All the food was accompanied from the “Champarrion” a typical drink from this region of Portugal which the recipe made some eyebrows move. Let’s just say, with a few cups of it, everyone was dancing their way back to the center! The day culminated with our last dinner party and night out in Viana, which made out a perfect end for the program… That was for some one of the best parts of the trip! 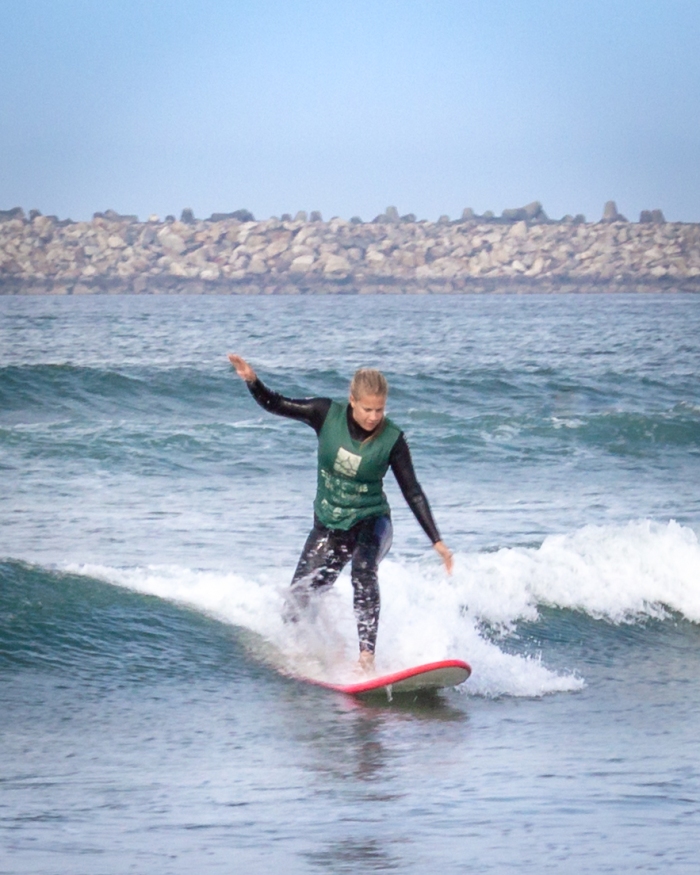 What I found the best about the trip was simply the great friendly atmosphere! Everyone was always in a great mood and relaxed, which made it very easy for me.
Of course it took some work to organize everything but at the end it did’t felt like much…

…the reason was that I was having really a lot of fun!:)

Now I’m looking forward for our next meeting! Being it in Portugal, Germany or on our next Liftsurf-Trip!:)

Surf is a multi-disciplinary and fascinating sport art!

In 2020 it will take part for the first time in history in the Olympic Games in Tokyo. That represents a major step for the openness and rejuvenation of the Olympic Committee and for our beloved sport.

Next Friday, 13.04.2018, I’m going to do a presentation about the development of the surf sport, the Surf High Performance Center of Viana do Castelo and Liftsurf at the Sports University of Cologne. 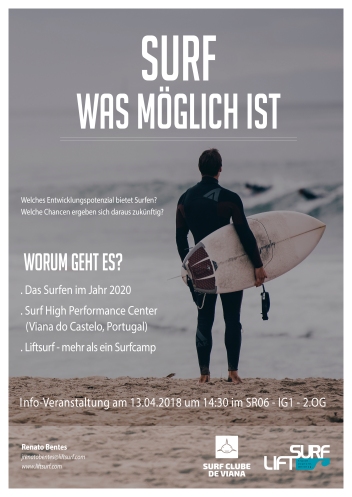 The presentation will focus on the following questions:

What is the development potential of the surf sport?

What chances will be available in the future?

I already started organizing the things for our surf trips 2018 to Viana do Castelo in Portugal. It would be of course good for the planing of the trips to know as soon as possible if I could count on you for this amazing wave searching adventure.

Therefore Liftsurf is offering you a early bird promotion!

A free-extra-night with breakfast and access to all the surf material and features of the Surf High Performance Center of Viana do Castelo if you confirm your place on our surf trip until the 5th of March.

If you have interest on our surf program and participating on this unique surf experience don’t hesitate to contact me @jrenatobentes or http://www.liftsurf.com/contactbooking/ 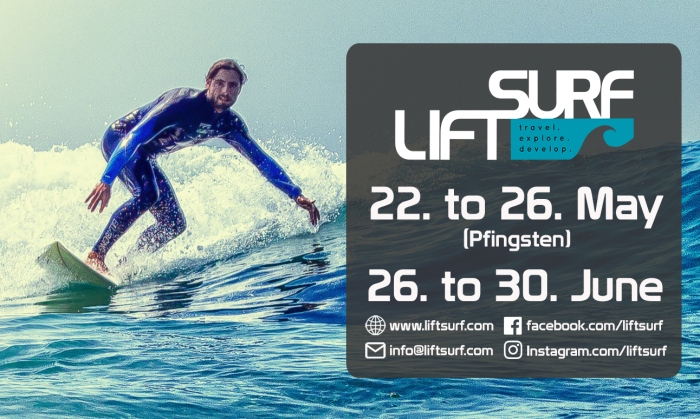 2018 is coming and with it plenty of more waves and sunny days at the beach. That’s why I invite you to write the following dates on your agenda:

The first date, from 22. to 26. May, coincide with the Pfingsten holidays in Germany and the most exuberant spring time in the nord of Portugal. In Viana do Castelo the sun will most certainly shine, warming up the spirit after a long winter. In this time of the year Viana do Castelo is a place where you almost won’t find any tourists. What you’ll find are beautiful empty beaches, a blooming and flourishing landscape and plenty of waves to surf. 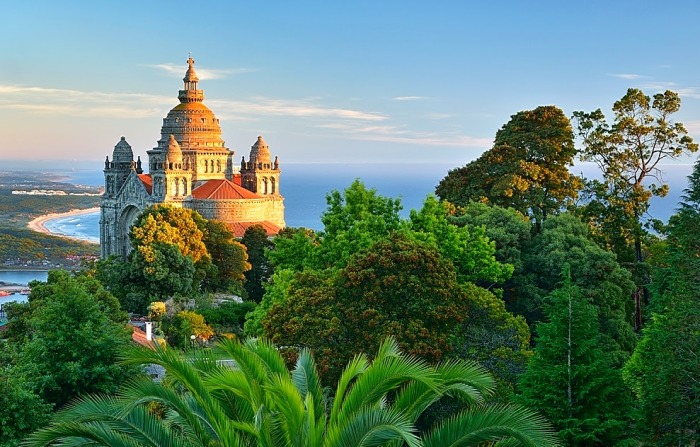 I have chosen the second date from 26. to 30. June because it is the period before the high season starts. In this time of the year we’re most likely to experience a summer like weather while getting a bunch of waves and a lot of free space on the line-up. May and June together with September and October are the best period of time for surfing in Portugal.

On this two weeks we are going to learn, improve and experience surf like you haven’t had before. We’ll be accommodated at the Surf High Performance Centre of Viana do Castelo, right in front of the renown Praia do Cabedelo, and we’ll be able to use all the resources the centre has to offer. Along with a vast panoply of surfing material, you’ll find a skate bowl, sauna, slacklines, SUP’s, beach volleyball nets and more.

The price of this all-inclusive surftrip with accommodation, food, surf courses, guiding and material and transfers (from and to the nearby airport of Oporto) is not to be beaten: 299€ per Person. The journey to Oporto is on your own expense but nowadays you can find relative cheap flights. After your arrival you won’t have any more expenses and you’ll just have to worry about making the best with the time you have on the beach and the ocean.

I’m looking forward to receive you in Viana do Castelo and share some waves together with you!

In October this year I got the amazing opportunity of organizing and guiding the first (of hopefully many) Liftsurf-trips. The challenge was considerable and ambitious: developing and implementing a week plan, that would include the extensive transmission of practical and theoretical surf knowledge, providing at all times fun and enjoyable moments.

With a lot of good feedbacks and remembrance of happy smiles, I’m glad to say that “it went really well!”. Of course, being on the start of this new venture, there were some unexpected situations and things that could still be improved. In the future, I will use the experience collected in this events and turn the weak aspects into a more productive and efficient logistic. I also would like to thank all the participants for the great ideas and suggestions that arouse during the trip. Some I will implement direct on the conception of the program for the next trips.

For the winter that follows I will be finishing my Master in the Deutsche Sporthochschule, in Köln, and planing the 2018 Liftsurf-trips. I will let you know as soon as I have some dates and news about them. Whenever you want to get some more information about the planing or the current stage of development of Liftsurf don’t hesitate to contact me at:

I will be happy to hear from you! 🙂